Note: This tutorial is for DIVA-2.0 users. DIVA-3.0 users should use the Materials > Load IES File command from the toolbar.

Radiance, the simulation engine behind many of DIVA's metrics, is not only constrained to daylight. It is possible to simulate the resulting light distributions from luminaires based on measured data. This is accomplished by associating IES files, a standard file format for the electronic transfer
of photometric data, with geometry in DIVA. This page serves as a tutorial for getting such data into DIVA.

What you will need for this tutorial

Furthermore, I built a small test room ideal for loading in IES files because its ceiling is slightly higher than Z=0, where IES files center the 'rough geometry' they contain. This file can be downloaded from the following links: Rhino 4 version, Rhino 5 version.

I recommend to save the three files (2 IES files and 1 Rhino file) to a folder which you can easily access from the command prompt. In Windows 8 you can create a command prompt easily in any folder, but if you're using an older version, C:\luminaire_test\ will work well. 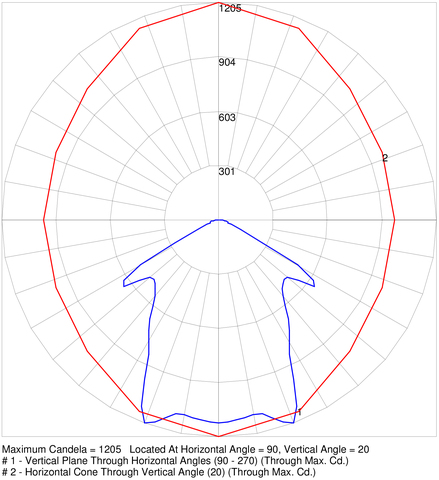 Luminous distribution of the Microslot luminaire 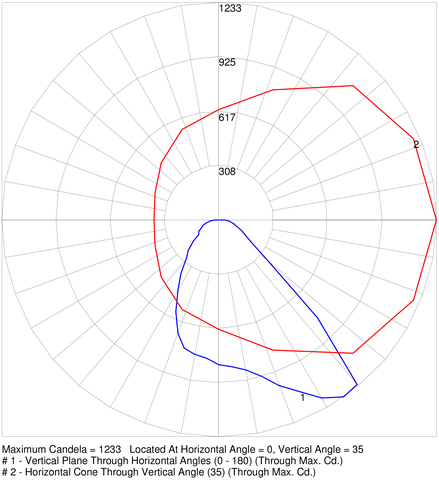 This tutorial requires the use of DIVA 2.1.1.0 or later, which was released on October 30, 2013. If you have an older version of DIVA, please download a more recent version from the Solemma website. When upgrading to a newer version of DIVA, we strongly recommend to delete the C:\DIVA\ folder before instaling. Backup your DIVA license files, custom materials and schedules first!

Go ahead and open the luminaire_test_model Rhino model. Click through the Location, Nodes and Materials buttons. I assigned standard materials to the layers. I set the grid spacing to 0.125 meters in order to have a finely meshed grid to visualize the lighting distribution. 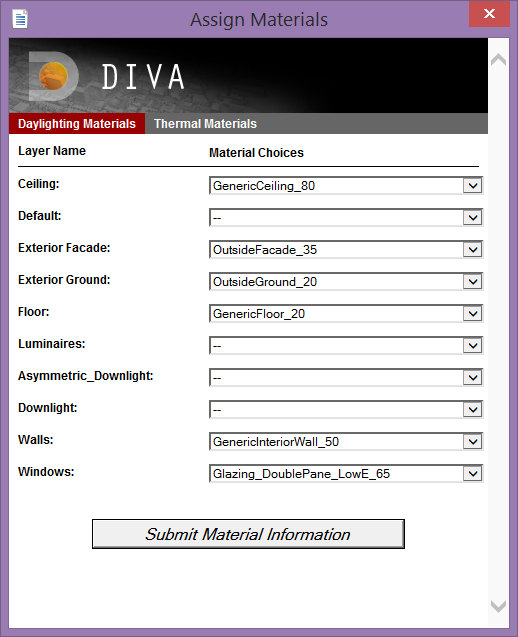 Assign the default DIVA materials to your layers like so.

Next let's make sure everything is setup correctly by running a simple visualization. This should look like the below rendering. 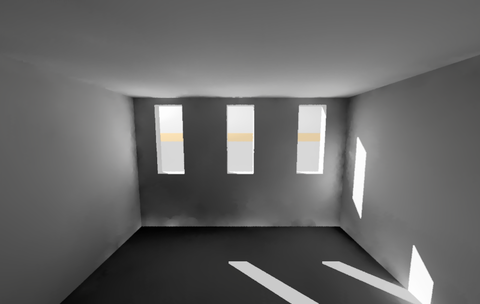 If all of the geometry shows up properly in the rendering, it is safe to continue. It is noticeable that the Radiance ambient parameters aren't perfect for this scene as indicated by the blotchy corners, but we'll worry about that later.

Step 2: Converting IES files into the Radiance format with ies2rad

Open a command prompt and browse to the location where you saved the IES files. We will execute a command that comes with Radiance specifically for the purpose of importing measured luminance data, ies2rad. Since our Rhino file is in meters and the IES file will by default be converted into meters, no extra command parameter is necessary; however, if you are working in other units make sure to read about the -d command flag in ies2rad.

To convert the Microslot IES file (20277.ies) into a Radiance format, we will execute the following command,

The -o option specifies the output filename and material name. "downlight" is a much better material name than 20277! We should do the same for the Designer Asymmetric KSH 3EA Lens Recessed file (17170.ies) with the -o option set to "asymmetric_downlight." You will note that an error about lamp type not being recognized is thrown when running the command on the asymmetric light. This isn't really important unless you are trying to compare the coloration of multiple disparate lamp types in a scene and is outside of the scope of this tutorial.

Another important thing to note is that by default, this process does not consider dirt depreciation factors. If you wish to apply a 15% reduction in luminous distribution due to dirt accumulation, include "-m 0.85" in your ies2rad command.

Step 3: Getting the Radiance data into DIVA

The two DAT files should be copied to the C:\DIVA\Temp\luminaire_test_model_*\ folder. We will be putting them in the Temp folder so that they are only accessible to the current simulation model. If you want to keep a luminaire for all future DIVA models, save the files in C:\DIVA\Radiance\lib\.

Now that the luminous distribution files are accessible by the simulation program, let's open one of the RAD files in a plain text editor such as Notepad or Notepad++. I'll use the Microslat downlight as the example here (downlight.rad). You should see the following,

A description of mostly plain text fields in the original IES file.

A Radiance-format four point polygon centered about X=0,Y=0 and slightly below Z=0.

The section described as, "Radiance material definitions that reference downlight.dat" can be copied directly into .\luminaire_test_model_* - DIVA\Resources\material.rad to be used with the current simulation project. The modified section of my file looks like below. 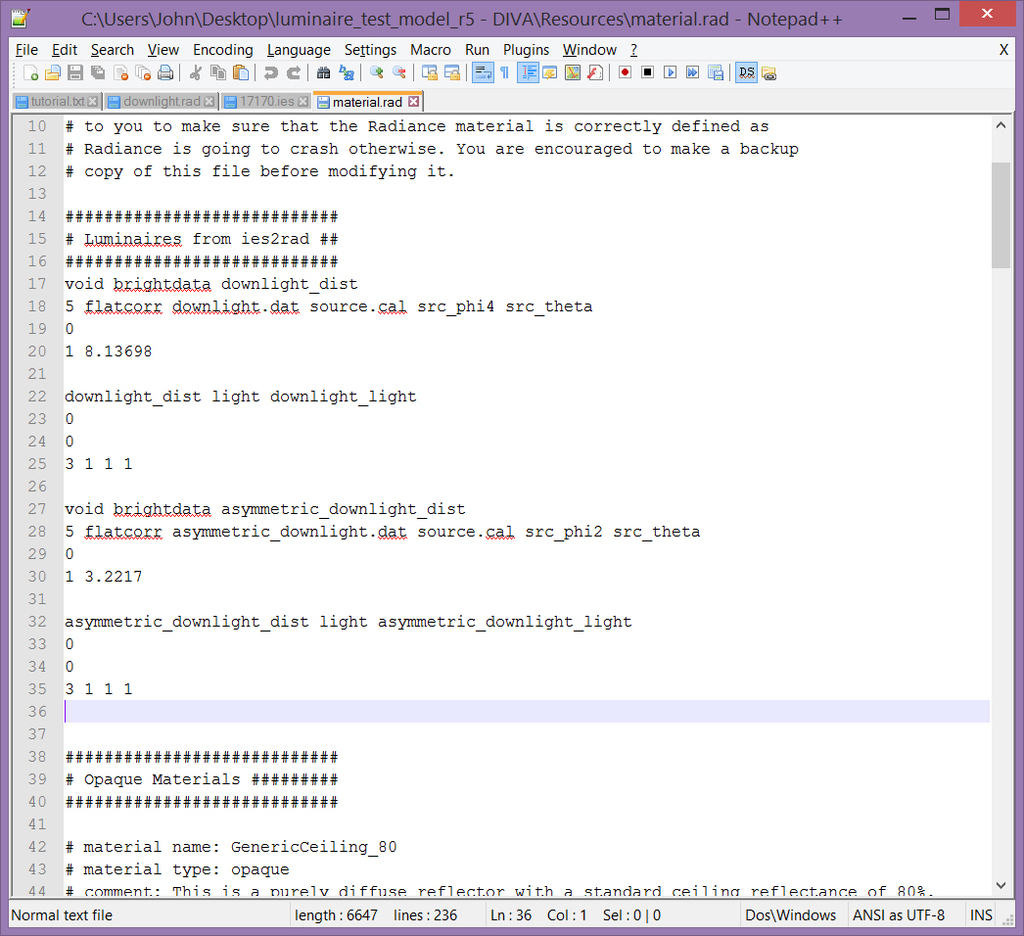 Step 4: Getting the geometry into DIVA

The IES data is very dependent on the geometry size and direction (surface normal) to be correct. As noted in step 3, this is a four point polygon. IES files can also contain boxes or cylinders. It is important to note that one cannot, at this time, model a Radiance cylinder primitive in DIVA. Boxes and simple polygons work just fine though. Anyways, we want to create the exact geometry that comes from the ies2rad conversion within DIVA.

One way to ensure accuracy is to load the four vertices of the polygon into Rhino 5 as points. We could do this manually, but for a box with 6 x 4 = 24 points, it would be very tedious. I like to copy the point portion of the geometry into a new plain text file,

And replace the tabs separating the numbers with commas using find and replace,

Finally, we can save this file as downlight.csv. Make the "downlight" layer already created in the file your active layer. Later we will assign the downlight illuminating material to this layer. To load the points into Rhino 5, just drag-and-drop the CSV file into the Rhino window, select "Import file," press "OK" and then press "OK" again, leaving the point import options as the defaults. 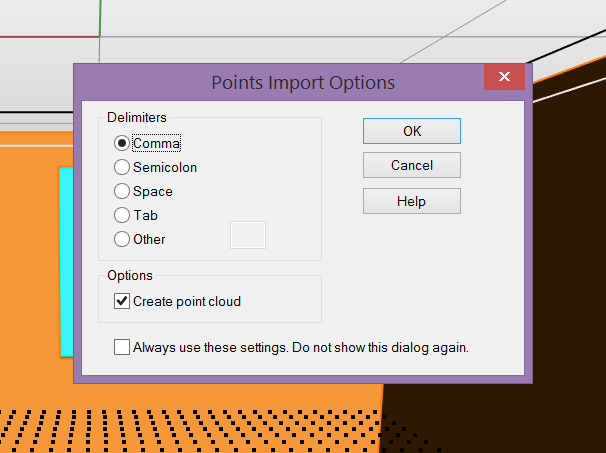 Leave the other options as the defaults and press "OK."

Now we're almost done. Turn on the point Osnap in Rhino and draw a polygon between the four points using the Plane command. Use the Dir command to make sure that the surface normal is pointing down. This is very important, as otherwise the polygon will not illuminate the scene.

Use the Dir command to ensure the polygon faces down.

Run the Materials command again and apply the downlight_light material to the downlight layer that you created the polygon on.

Apply the appropriate materials created in Step 3 to your Rhino layers.

Finally at this point an image or grid-based simulation can be rendered! Make sure to set the time to a period when the sun isn't up, such as 23:00.

And then run the metric by clicking "Run Simulation."

Visualizations can also be rendered. I recommend to clear out the "Radiance parameters" box and replace it with the following,

This allows many of the default Radiance ambient parameters that deal with sampling illuminating surfaces to be set without us having to worry about it. A brief explanation of what is left is explained below,

aa, ambient accuracy and ar, ambient resolution: these control the level of interpolation between rays

ad, ambient divisions: 1024 rays are shot from each reflection

as, ambient supersamples: if there is a large luminous difference between nearby rays, the number of extra rays to be shot to resolve the transition accurately. 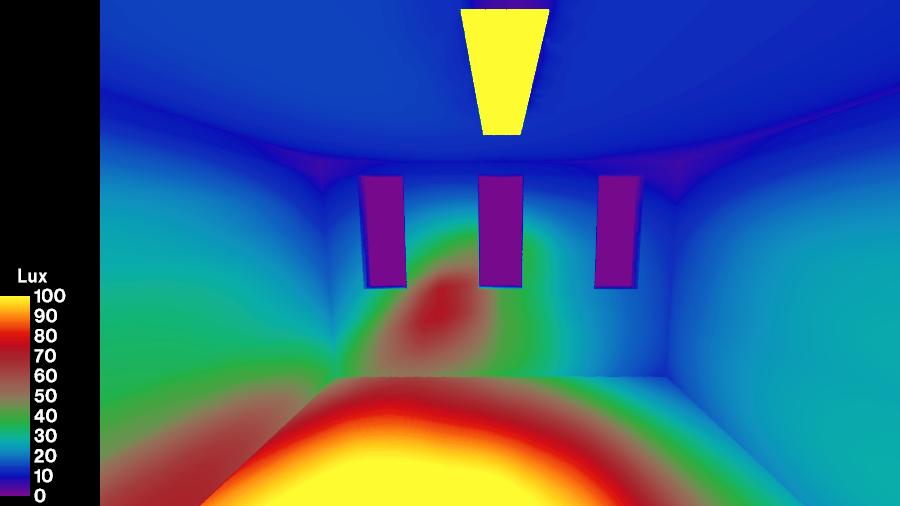 It is necessary to mention that the luminaire geometry can be moved and copied freely about the Rhino file. However, it cannot be rotated or scaled in any way at this time while maintaining the proper luminous distribution from the IES file.

This process will, one day, be fully automated within DIVA.

Please contact alstan@solemma.net with any problems following this tutorial.