In a real building, shading devices are not all opened and closed at the same time but can be operated independently. DIVA therefore implements shading controls for up to two independent shading groups that can be controlled independently of each other. The shading groups can for example correspond to venetian blinds for different facade orientations or a facade may have two sets of blinds, one in the upper and one in the lower part.

These shading controls can be implemented in any Climate-Based Metrics (DAYSIM) simulation and will affect the amount of available daylight, view to the outside, and any lighting control systems in the space. 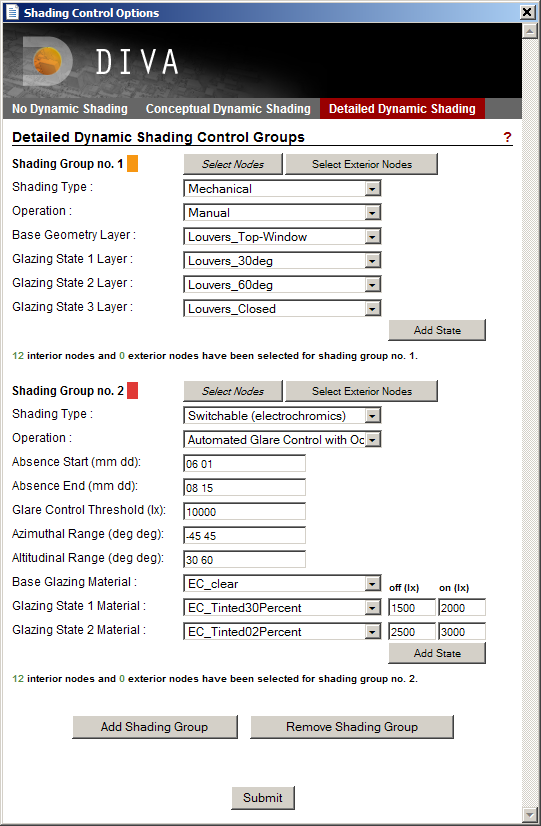 When this option is selected, no shading systems are considered beyond what is modeled in Rhino as exported geometry. In effect, windows are modeled as 'open' at all times and no blinds or operable shading devices influence the available daylight, even if occupant discomfort might be a problem.

Conceptual dynamic shading considers the operation of an idealized blind that covers all windows in the scene without the need for modeling the device geometrically. The effect of this blind is to reflect all direct sunlight and allow only 25% of diffuse sunlight into the space. Using conceptual shading is very fast and takes the same amount of time as running an identical simulation with no dynamic shading.Conceptual shading devices are limited in their control, and it can be considered that all are down or all are up at the same time.

Choosing workplane sensors is necessary for results with dynamic shading to be meaningful.

The control of dynamic shading devices uses the Lightswitch algorithm (Reinhart, 2004). If an annual glare calculation has been run, then the predicted occupant discomfort is used to determine whether an occupant will lower a shade or not (lowered when DGP>0.4). Otherwise, occupants decide whether or not to lower the conceptual shading system by the presence of direct sunlight at each time step in the annual simulation. For this, it is necessary to define where occupants sit by choosing workplane sensors. If workplane senors are not chosen, then the presence of direct light on any sensor (even those near the window) will cause shading to be lowered.

Detailed dynamic shading controls have two shading-type modes: Mechanical and Switchable (electrochromic). The mechanical mode is used to control dynamic geometric shading such as blinds or rotating louvers which are modeled on separate layers in Rhino. The switchable mode is used to control glazing which changes state from mostly transparent to mostly opaque by switching out material definitions for a specific glazing material.

Mechanical shading systems take Rhinoceros layers as their input. For example, to model a dynamic venetian blind, it is necessary to actually create the geometry of the blind on a discrete layer and to assign a material to it. Then under the field Base Geometry Layer, "No fixed shading state (blank.rad)" will be selected since in the default state the blind is pulled up and is not present in the scene. Under State 1 Layer, the Rhino layer with the geometry will be selected.

A dynamic mechanical shading system for a venetian blind

For further information on the Advanced Dynamic Shading Module go to the DAYSIM web site.

Note on Detailed Dynamic Shading Controls
In case there are several shading groups in the same facade, DAYSIM assumes that for an automated system the signal at the control illuminance sensor for one group is not influenced by the setting of the independent control group. For example, if a venetian blind is combined with an electrochromic blind system and the EC glazing is automatically control via an internal illuminance sensor, Daysim assumes that the venetian blinds do not block the view of the illuminance sensor when lowered. If they do, this would in reality lower the signal at the EC control point and switch the EC glazing into a clear state. DAYSIM will not reproduce this because the iluminances for different shading groups are assessed independently form each other.