Lighting controls can be implemented in any Climate-Based Simulation, with or without dynamic shading devices. After running a climate-based analysis, hourly lighting schedules will be generated, and a falsecolor visualization of the schedules will be provided. 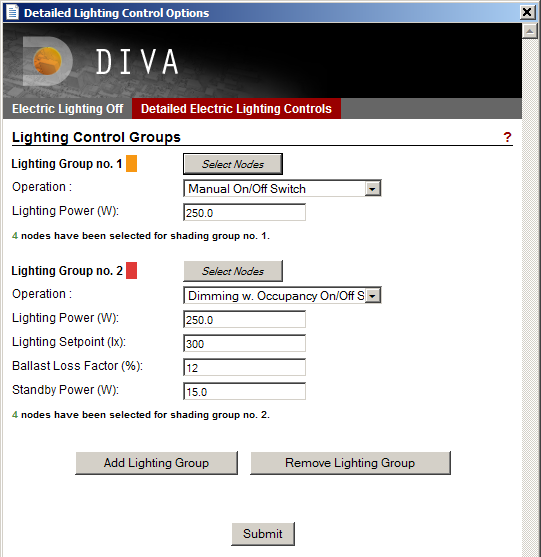 Manual controls (Lighting Group no. 1 above) mimic the behavior of a user based on the statistical analysis of the 2002 Lightswitch study. Users occupying a space (defined by selected sensor nodes) are likely to turn off the lights at levels of around 250lx.

Automated controls (Lighting Group no. 2 above) mimic a continuous dimming sensor with a user-defined setpoint, ballast loss factor and sensor standby power. The location of sensors are defined by the selected sensor nodes.

Controls with the "Switch Off" option makes sure that occupants do not leave the lights on at night; however, as DIVA/DAYSIM considers conscientious occupants, the statistical likelihood is low.

Switch On/Off maintains lights always on while occupants are in the space. This mode is especially useful when modeling a scheduled continuous dimming system without a physical light switch.

Standby power refers ot samll amoung of energy drawin by some automatically lighting systems even when the system is "off".

Percentage of peak energy used by a dimming system when fully dimmed down.